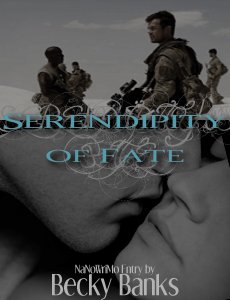 For those of you following along on this NaNoWriMo adventure, I’m crafting a 50,000 word story by December 1st. And since it’s a contest, I’m sharing each word with you here on the blog.

Today we have the first chapter to this raw (aka, omg soooo unedited) story of wounded love in Serendipity of Fate. Total word count: 1,655. Feel free to double check. :0)

Sophie stepped out of her pearlescent, leather interior-ed SUV and hauled with her a bag of groceries for her mother. The late southern afternoon was like the others, hot, humid and downright suffocating. Bumping the car door shut with her hip she approached the house. It was a single level ranch home, in nondescript blue which blended in with the other nondescript 70’s ranch homes around it. A postage stamp front lawn, like the others marked it’s place separate from the cul de sac road. The lawns, the only means of homeowner expression ranged from untamed wilderness, fashion gardens to bright green lawns trimmed to within an inch of their life in military-like precision. Her mother’s was the latter.